SIDE EFFECTS brings together the work of two photographers.

Lynne Cohen (CA) and Bert Danckaert (BE) capture the residues of human activity without showing people themselves. The registered constructions do have in Cohen's case a more 'found-object' level, whereas Danckaert combines landscape with still life. In both cases a sharp and humoristic ambulatory with the artificial and banal is omnipresent. While Cohen sets limits to photographing interiors, Danckaert focuses mainly on the open space of new suburbs. Both of them generate images with a strong claustrophobic character. The apparent settings they capture are so enclosed within the framework of the picture that it seems as if there's neither entrance nor exit. 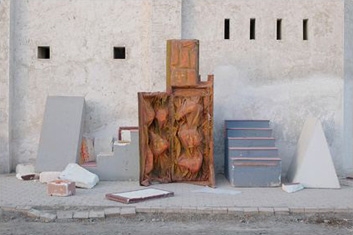 Bert Danckaert shows a selection from Make Sense!, the vast photographic work he has been working on since 1999. His well-balanced compositions combined with the arid banality of the subjects, render his pictures an almost absurd existential meaning. 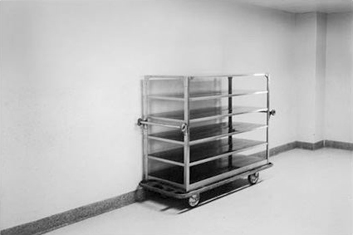 Lynne Cohen presents the recently published Camouflage in Netwerk for the first time. It is a survey of and retrospection on Cohen's career, which goes back to the early seventies. In Camouflage she brings together works that have never been exhibited nor published before, either because of purely formal deviations, or because some of the photographs simply needed more time; these then became the preambles of later work.

Both photographers assume a seemingly neutral registration practice but neither of them work in a documentary style. The metaphorical and symbolic character of their photographs has a specific conceptual, social and political undertone.